As I staggered across the 5 km line every joint in my body ached but I also felt alive. I was accutely aware that I, like so many of my fellow participants, had faced down some of my ghosts and had gained more than a commemorative medal for giving it a go

On a warm Sunday morning I lined up with hundreds of women to exorcise some ghosts and do my bit for a leading British cancer charity. Spring in British cities heralds the start of the charity run season and with its numerous parks London is no different. Although charities are always desperate for funding, in light of the collapse of Icelandic banks Kaupthing and Landsbanki charitable institutions are vying more actively than ever for the attention of runners willing to bother friends for sponsorship money.

One of the more established events in the race calendar is Cancer Research UK's Race for Life series. Orignally conceived as a way of raising money for research into breast cancer, the all-female runs are set over a non-threatening five kilometres offering many woman their first adult experience of racing. As runners tend to be cancer survivors or relatives and friends of sufferers the event is poignant for most participants and the emphasis is on personal achievement rather than record times. A good thing too as I was in a shocking physical state!

The murderous hours at work meant my training had been reduced to somewhere between minimal and zero. However, as any distance-runner knows, finishing is 50 per cent about training miles and 50 per cent about mindset. Could I convince myself that my mind at least was ready? This was to be my first race since an accident in 2006 and more importantly since my mum lost her own battle against cancer four years ago. I was not sure I would every be ready but today was as good a time as any to give it a go. If nothing else I could enjoy the venue: Crystal Palace Park.

The park in South East London dates back to the ninenteenth century when suburbs like Sydenham, Gipsy Hill and Dulwich sprang up with the arrival of wealthy merchants. It derives its name from Sir Joseph Paxton's greenhouse which graced Hyde Park during the Royal Exhibition of 1950 - a year-long event to celebrate the wealth and influence of the British Empire which no doubt also functioned as the Victorian equivalent of a modern trade fair. The vast greenhouse was so celebrated that at the end of the exhibition it was dissambled and rebuilt in what would become known as Crystal Palace Park, defining the park's vista until it was destroyed by a devestating fire in 1936.

During the war years and the post-war austerity, Crystal Palace Park fell into general disrepair. The Sixties however marked a new episode due to the construction of the National Sport Centre with its Olympic pool and "state of the art" athletics stadium. Although the centre is a hideous concrete structure it is well-respected by athletes as the venue of 21 world records. 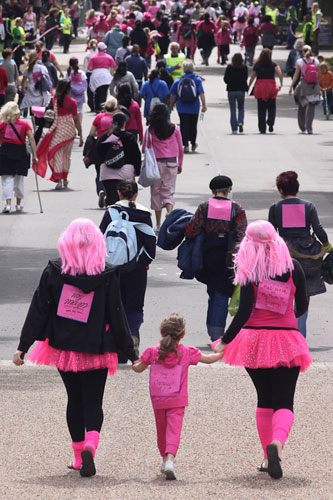 As I set off on the undulating course in this hub of British athletics I reflected on my countrymen's ambivalent attitudes to sport and sporting achievement. With the London Olympics of 2012 drawing ever nearer barely a month goes by without the Government launching a campaign to encourage more exercise amongst the British population. Or some ministerial department promotes yet another inititative to stimulate competive sports amongst youngster in the hope of emulating the success of the Australian and Chinese home athletes in the medal tables at the Sydney and Beijing Olympics.

Apart from the "mass following" that football enjoys - which I find unfathomable - it is however hard to name a sport which instills pride in the nation let alone encourages Brits to slip into lycra sportwear themselves.

True, Britain is associated with that other ball game rugby. However, even battles between century old rivals England and Scotland on the hallowed grounds of Twickenham to the west of London or Murrayfield in Edinburgh only account for minority viewing. Then there is that wonderful invention: cricket. Personally, I admire any sport where a single match can last five days, with scheduled breaks for lunch and afternoon tea but whilst cricket is a religion in India, Pakistan and the West Indies, in this country it is very much a vestige of middle class society.

With Wimbledon being the home of lawn tennis, does this game capture the British imagination? In recent decades the nation has habitually rallied hopefully behind the current national number one or an unknown but promising local player. Brits then queue for hours to secure a tickets to watch a possible home-grown champion. The player in question invariably battles valiantly for about a week before being knocked out in the Fourth Round or Quarter Finals, and with resignation my countrymen praise their local hero for his brave efforts.

Such tennis scenes actually illustrate the British attitude to sports extremely well. Whilst Australians and Americans love a winner, we like a "tryer". Anybody who watched the 1988 Winter Olympics in Calgary, may remember Eddie the Eagle, the strange myopic ski-jumper who despite a lack of training facilities, formal training and any real skill managed to jump his way into the national team. Although he finished last in his events, he captured the hearts and minds of audiences in Britain and beyond.

This British affection (and respect) for a tryer partly explains why novices of all shapes and sizes line up for charity runs and why mass participation road races like the London Marathan and the Great North Run are oversubscribed each year. Mere mortals who have often not run since their school days feel a need - whether for charitable purposes or personal pride - to try something they never thought they were capable of. And no matter what their finishing time is, strangers (including serious runners) will cheer them on as they cross the finishing line and respect their achievement.

As I staggered across the 5 km line every joint in my body ached but I also felt alive. I was accutely aware that I, like so many of my fellow participants, had faced down some of my ghosts and had gained more than a commemorative medal for giving it a go.