Nice to see the British spirit of direct action is alive and well! 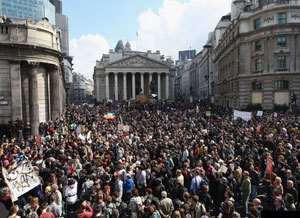 On a bright April Fool's Day morning I fearlessly marched from London Bridge station to my office on the edge of the City of London (the City), not knowing what would greet me en route. In the run up to the G20 summit excited journalists had speculated on the likelihood of violence on the streets of London. All police annual leave had been cancelled for the two-day summit at which the great and the good of the world would try to find a solution to the current global economic meltdown. The management teams of major financial, legal and corporate institutions in the City and Docklands were advising their staff against any unnecessary travel and authorising them to "dress down" in order not to be a target for anti-capitalist protestors.

However, as I had a client meeting that day, I strode purposefully to work, wearing a trousers suit, carrying a laptop case and generally flaunting all the warnings and advice.

The first leg of the journey from London Bridge was a delight. Rather than doing battle with throngs of black and grey clad City-workers marching to their offices like ants I breathed in the river air as I crossed the bridge and enjoyed a brisk walk along empty pavements.

Once I had past the Victorian splendour of Leadenhall Market - immortalised in the Harry Potter film The Philosopher's Stone - I was expecting to see windows boarded up and crowds streaming towards Threadneedle Street for a show‑down at the Bank of England. But it was not to be. The spring sun continued to beat down on deserted streets.

Then I braced myself to run the gauntlet of Bishopsgate, Liverpool Street Station - a major transport artery which could bring protestors deep into the heart of the City - and the new Royal Bank of Scotland (RBS) building before diving off into Spitalfield and my office. Surely here I would be confronted with a mob ready to express its fury at the economic mismanagement that resulted in RBS suffering the largest losses in British corporate history and hand its ex-chairman a £700,000-pension per year for his "achievements". I braced myself to scurry past angry protestors and was ready to persuade a policeman that I had a bona fide reason to pass within a metre of the RBS building.

A few clashes and some vandalism 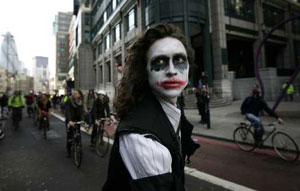 True, policemen were standing around in the morning sun and there was a modest barricade blocking the entrance to RBS but apart from that it was remarkably quiet. Not a whiff of trouble. In fact, to my amazement - and delight - the two Neapolitan brothers had pitched their espresso van with its old fashion pump action Gaggia machine on their normal pitch next to RBS and were doing a good trade in thimbles of thick black espresso. Business as normal as far as they were concerned!

Later I learnt that, there had been a few clashes and some vandalism as well as complaints about heavy-handed police tactics but on the whole the day generally passed off with noisy but good humoured protests. However, as I queued for my shot of coffee, I was trying to work out whether I was disappointed at the lack of drama after all the media hype or hopeful that the British public would rise up in its "anti-hero" way in keeping with the paradoxical tradition of British direct action.

Whilst the French have a noble tradition of protest, they tend to storm the Bastille, rip up the cobbles on the Champs d'Elysée or blockade ports. Although Britain has seen its share of violent demonstrations, on the whole we prefer a slightly lazier and more random approach to protesting, both in the causes we back and the methods we adopt.

When I think back to the iconic images of direct action in Great Britain during my lifetime, there are certainly memories of violent clashes, often aggravated by militant minorities, such as the bitter Miners Strike of the early Eighties which lasted for more than a year and signalled the rapid demise of mining in this country. Or the Poll Tax Riots in the early Nineties, in which anarchists caused mayhem in Whitehall and Parliament Square in their demonstrations against the introduction of the "Community Charge" - a form of local tax which disproportionately affected poorer households and was so despised that it would ultimately lead to Margaret Thatcher's downfall.

The majority of my memories however are of non-violent civil disobedience such as the peaceful Free Nelson Mandela demonstrations (whether students and liberals chanting outside the South Africa House on Trafalgar Square or middle class wives around the country refusing to buy Cape apples as part of the unofficial boycott of South African goods). The camps at Greenham Common where women chained themselves together outside air force basis to stop the delivery of Trident missiles in the Eighties. Or the Svejk-like character Swampy and his fellow eco-warriors who lived in the tree tops and tunnels in the forests around Newbury for months to outwit the police and delay the construction of a bypass road through an area of natural beauty. Or more recently the British public translating its anger at the BBC' failure to broadcast the Disasters Emergency Committee (DEC) Gaza Appeal into a flood of donations to DEC in order to send blankets, food and water to the civilian Palestinian population following the recent Israeli shelling of Gaza.

The smell of bitter coffee, however, brought me back to the present... and as I collected my shot of espresso and turned to head to the office, a well-dressed woman in sensible heels stepped out of an iconic London black taxi, paid the driver and asked me if I could "please" point her in the direction of Liverpool Street station as she was due to meet friends for the march on RBS. Nice to see the British spirit of direct action is alive and well!